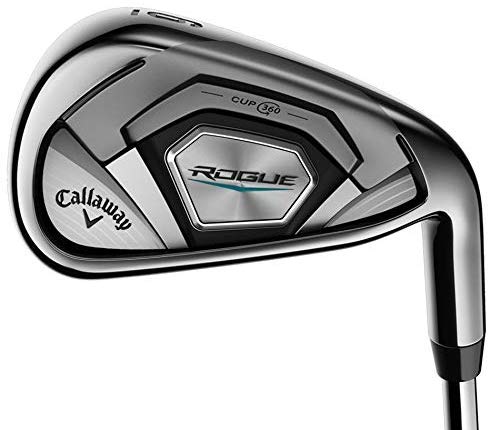 Is the Callaway men’s Rouge really one of the best irons for a beginner like many players are claiming? This model is one of the latest to hit Callaway’s line. It comes with the patented 360 face cup technology, which is nothing new to Callaway irons and drivers, but it’s a feature that will cause many golfers to sit up and take notice. This time around, the manufacturer has gone above and beyond by including a variable face thickness with the 360 face cup technology. The club itself is able to bridge the gap between a club that’s versatile and confidence-boosting, offering top of the line playability.

Our Verdict: What can you say about a club that’s already made quite the name for itself? This iron is at the top of the list of every golfer who wants to instantly improve their speed and distance. This model offers excellent playability, thanks to the 360 cup face technology, combined with the variable face thickness that gives this club the power to totally change the way you play while helping to improve shot accuracy and precision. If you’re looking for a top of the line club that can help you get your game where it needs to be, then the Rouge is the answer.

Callaway is one of those major brands that golfers of all skill levels are familiar with. If you searched for the best golf range finder and ended up with the Callaway 300 Pro golf rangefinder, then you probably decided right then and there that you were sticking with this brand. This is a company that’s known for its quality golf products. Their latest iron is making waves for its ability to instantly improve ball speed and distance.

What’s not to love about this club? The use of 360 face cup technology combined with variable face thickness allows for increased ball speed, so even a beginner can get that boost of confidence they need to perfect their long game.

The manufacturer has totally redesigned this club, offering the latest in golf tech. For instance,  the addition of urethane microspheres can be a total game-changer for some players. The layer of soft material placed in the head of the club does an excellent job of absorbing vibrations in order to improve the feel of the club, giving players perfect feedback on their hitting performance, without slowing the face.

These tiny air pockets referred to as microspheres create porosity. Upon impact, they will flatten and change shape to create space for the urethane to flex to prevent slowing the clubface. This material also dampens vibrations which can cause unwanted sound.

But that’s not all. This is a club that’s designed to boost club speed, distance, and playability. It’s the club every beginner needs in order to shave some points off their game instantly, and it’s definitely a club that can give you the confidence you need to stick with this game and work harder to improve your performance. And that’s exactly what Callaway wants.

The club is made out of a variety of materials designed to help a player smash each and every shot, offering optimal playability. The tungsten weight is precisely positioned to offer better than average launch conditions and improved spin.

Urethane microspheres are used in the design to help minimize vibration, which is what enhances the sound on impact, and all without affecting ball speed and distance.

Using this club means that the ball will carry more distance than what you’ll get with a cavity iron or a hybrid club. However, the manufacturer claims that the coefficient of restitution is just shy of 0.835. This means that the type of distance you’ll get will be more a matter of launch conditions than anything else. If you want to learn other ways to improve your performance out on the green, be sure to stop by and read my in-depth article on golf grip tips.

The large Aldia Synergy sixty graphite shaft and the sizeable profile are both clear indicators that this is a club that’s targeted toward high handicappers.

As a beginner, most players don’t realize just how much club-quality matters and how it can impact a game, their performance, and even their motivation out on the green. If you’re in need of a club that’s the ultimate confidence booster, this club is it.

The club’s ease of launch, distance, ball speed, and the amount of forgiveness it delivers tells me that the manufacturer chose an appropriate target market for this particular club. Even though this is a larger club, it doesn’t feel too large and heavy when you’re taking a shot. Instead, it offers the perfect playing experience for the beginner with just the right amount of forgiveness. On the bottom of the club, you’ll find double white score lines which will help the player in terms of alignment.

This model is tech-heavy for a reason. The easy launching ability, combined with the improved distance and high ball speed is partly due to the internal standing wave. The tungsten weight has been placed right behind the center zone to position the center of gravity. The location of the center of gravity is what controls the launching trajectory, offering plenty of forgiveness, even with strikes that are off-center. This weight distribution is clever and works perfectly to promote high flight and a nice amount of spin.

In the hands, you’ll note the lightweight design, with the heavier club head weight, and the ergonomic grip that makes the club feel just right in your hands. This club offers a nice feel as you take practice swings, with its perfect weight and excellent center of gravity design.

A type of metallic hit sound is often associated with distance irons that have a larger head. Basically, those clubs just don’t generate much feedback for the player. To bypass this issue, while improving the iron’s sound, the space inside the head of the club has been filled with urethane microspheres. These are basically pockets filled with air that are designed to absorb a harsh hitting sound, minimizing vibrations. The club offers a sound that’s much better than what you’ll get with lower-priced irons.

The Big Bertha is another one of Callaway’s top-selling irons, for many reasons. It can instantly improve ball speed utilizing the same 360 face cup technology that the Rogue offers, so you’ll enjoy more distance where you need it. It also offers maximum forgiveness, so your ball will fly straighter and launch higher.

The club’s hollow construction puts the weight where you need it, in order to improve shot accuracy. Both the Rouge and the Big Bertha are great irons for the beginner. You’ll find that choosing between these two clubs can be pretty difficult, considering both can help to improve your game in a number of ways. Both are also offered at a comparable price. In the end, it will be a matter of whether you’re looking for a club that comes equipped with urethane microspheres for better feedback, or a hollow club design that’s just as forgiving, but doesn’t offer any vibration dampening technology. 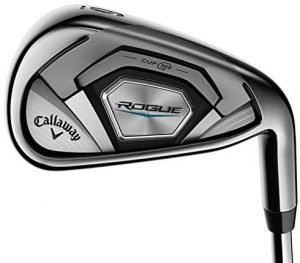 Callaway is a company golfers know they can depend on and trust to produce clubs that really can take their games to the next level, whether they’re a low, mid, or high handicapper. Their clubs are versatile and offer that something extra that has golfers looking forward to the release of new clubs and other golf products by this manufacturer.

With the Rogue, for some reason, it didn’t get as much attention as it should’ve. Just like the Big Bertha by Callaway, this is a club that a beginner can rely on, and one they need out on the green if they’re searching for a surefire way to improve their score and overall performance.

If you’re looking for a club that can give you more control and precision over your shot quality, then the Rogue is the club for you. This model is made out of a variety of high-quality materials that are designed to improve the player’s accuracy, ball distance, and club swing speed.

This club will basically give you maximum distance thanks to the combination of its precise center of gravity positioning, variable clubface thickness, and the larger clubhead. It’s clearly one of the most underrated clubs by Callaway, considering that it can be a total game-changer for the beginner looking for a way to instantly improve their performance, hitting accuracy, swing speed, and distance. I gave this club a rating of four and a half out of five stars.