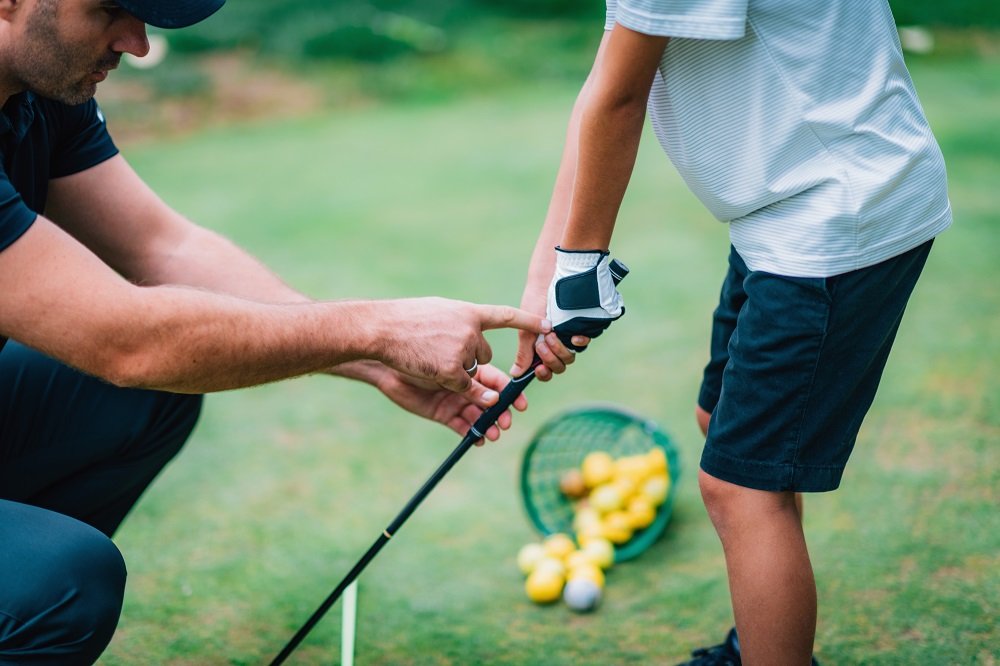 Can you imagine how boring golf would be if you took every single shot the exact same way? Taking different shots is what makes golf so fun. But it’s also what makes golf so challenging. Learning how to choke down on the golf club knowing when to do it and why to do it is something that beginners tend to learn the hard way. In this guide, I’ll cover the fundamentals that go into choked down shots and what you need to do to practice and develop your own ability.

How Choking Down Impacts Your Swing

If you’re new to the game, you may not even know what choking down on the club means. When you have a good iron in your hands, you can choke down on a club by moving your hands down the grip at address, in order to reduce the distance of a shot. However, there are other possibilities that can come with choking down on a club and the type of results it can provide.

The most common reason a golfer will choke down on the club is to reduce the distance of a shot. If you want to take a few yards off your usual distance that you get from your club, then choke down on it.

As an example, if you normally hit your 7-iron at a hundred fifty yards, but you want to hit it at 144 yards, you can choke down a couple of inches on your iron and take a more comfortable swing.

Instead of trying to hit with your 8-iron as hard as you possibly can, you can choke down on a 7-iron instead.

Another reason a golfer will want to choke down on their iron is to take some spin off the ball. If you keep your hands up at the top of the club when you make a full swing, you’re likely to produce quite a bit of backspin. So, if you want to learn how to reduce your drive especially if you’re hitting a short iron from a fairway lie, choke down on the club an inch or two.

If you’re faced with a shot that could be handled better using a lower spin rate, then choking down on your club is the best way you can accomplish that. While there will definitely be a reduction in speed, the spin rate will also be lower as the ball flies through the air.

If you’re dealing with high wind conditions, then choking down on your shots can also help. When you hit a shot with the hands positioned low down on the grip, they tend to come out lower and will fly lower as they move toward the target. That’s the best thing about choking down on your club when the wind is blowing. Doing so, allows the ball to move around the course more accurately.

On a windy day, you don’t want to hit the ball way up into the sky. A better alternative is learning how to choke down on your club correctly which will allow you to easily manage windy conditions.

How to Choke Down on Your Club 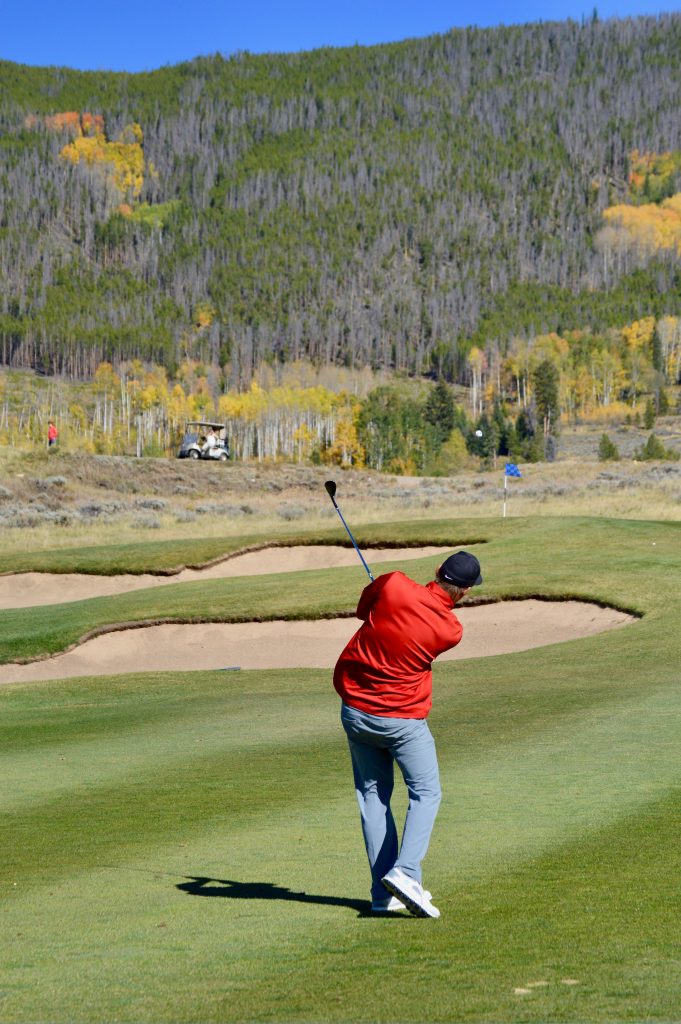 If you’re serious about golf, then you’re already aware that any shot you want to try playing on the course should be practiced at home or at your local range. So, if you’re not familiar with choking down on your club you can give it a shot during your next practice session.

All you have to do is hit a few balls off, practice choking down, and see how it goes. Now is the time to experiment with this hold, and over time you’ll notice some improvement.

When your hands are choked down on the club it’s very easy to rush a swing. Your overall swing will be much shorter. Because of this, you may feel tempted to rush through the swing in order to get away from your average tempo. Try to avoid this trap if possible. Make it a point to let the swing naturally develop from beginning to finish and take your time.

Keep in mind, your club is now significantly shorter than it would be if you were taking your normal swing. This means that you won’t have as much club between the ground and your hands. Because of this, you’ll need to do a better job of staying down through impact if you’re going to make contact that’s clean. You won’t be happy with the result if you end up hitting the shot thin.

If you are choking down on the club to hit the ball lower than it can be a good idea to cut off the finish of your swing and finish with the club out in front of your body instead of swinging all the way up to the full finish and having the club wrapped around your back.

Choking Down Based on the Situation

Once you become more comfortable with choking down on your club it’ll be time to put your skills to the test on the course.

Choosing your spots wisely is one of the biggest keys to the whole process. This is definitely not a shot you want to force into action. Instead, you’ll want to use it when it’s really needed.

Before you decide to choke down on your club ask yourself if you need to take some distance off your shot. Do you need to hit the ball lower?

While you may want to show off your new shot, don’t force the situation. Whenever possible, play a stock shot instead. Consider using your normal shots initially, moving to something like a choke down shot only when the situation calls for it.

Choking down on your club is not a shot that you want to use all the time. It’s also not a shot that you’re going to master after one afternoon at the range. However, it can come in handy for a variety of shots but it’s a skill that will take time to develop

Ball Flight and Choking Down

Many golfers are interested to learn how much choking down on a club can have an impact on trajectory and distance. Below, I’ll go over the different club options and how it can impact your shots.

Hitting a full shot using a sand wedge and choking down will not alter your flight significantly. In most cases, you will only lose a couple of yards of distance. Additionally, dispersion will typically be the same, however, choking down can center your shots over the target much better. If you have a tendency to pull your sand wedge to the left of the target with your normal chip shots, then choking down can be the solution. Additionally, your ball flight will be slightly lower. Overall using your sand wedge and choking down on a club will not have a very drastic impact on your shot.

When you choke down on your 7-iron you’ll notice more interesting results. Here dispersion may be tighter in either direction. You’ll also have improved distance control, with a tighter dispersion of around 10 yards. On average, your distance will only be around two yards shorter. Overall, you’ll be able to hit much farther without choking down, however, it’s clear that your strikes are more consistent when you do. When you choke down on a 7-iron your ball flight will be lowered about 5 to 6 feet, however, you’ll have almost identical spin rates.

When you use your 4-iron you’ll notice some significant changes. You’ll lose around 10 yards for most of your shots. Your ball flight will be about 12 feet lower. In both directions, dispersion should be slightly tighter. When you choke down on a 4-iron and it will reduce the backspin you can get on your ball, which is why you’ll gain so much distance. 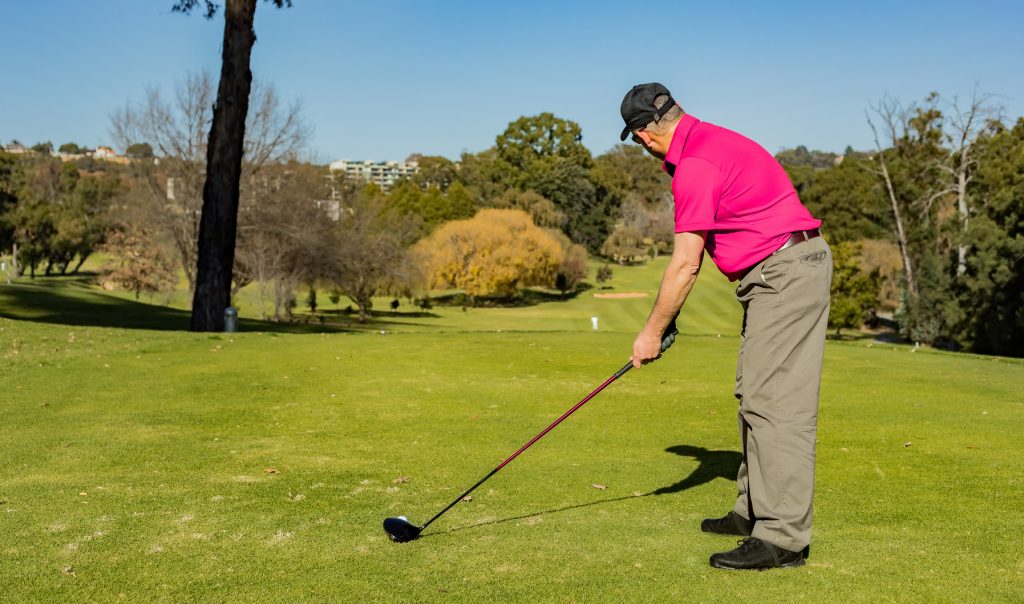 When you choke down on your driver, you should notice the loss of around 20 yards but an increase in accuracy.

As you can see, choking down on the golf club can have a major impact on your ball flight and can be a perfect choice if you want to take off some yards. Of course, it’s important to know when you should choke down and when you shouldn’t. Choking down on your club will only come in handy in certain situations, such as high wind conditions or when you want to reduce the yardage of a shot. It can also take some practice to get it right. Experimenting with different clubs will also affect your shots when you choke down. This is why it’s so important to practice with your golf launch monitor or at the range before you try and show off your new skills out on the course.