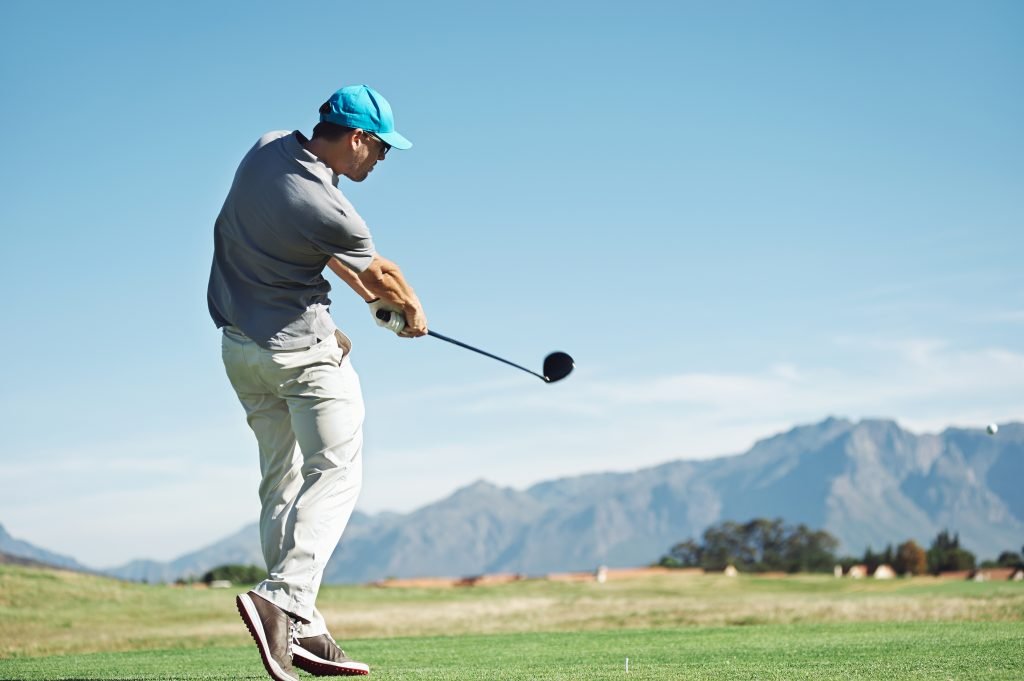 Aside from the putter, the driver is one of the most important clubs in your golf bag. Playing from the fairway can make your game a lot easier, but you will have more chances to make birdie and you will have shorter approach shots if you get good distance on your drives. Because of this, understanding driving fundamentals and how to hit a driver is definitely a priority and one any golfer worth his or her salt should focus on if they want to improve their golf game.

The Importance of Balance

Aside from learning how to score in golf, remaining balanced should be your biggest priority when you’re hitting a driver. Most players tend to lose their balance when they try to maximize distance and end up swinging too hard. Realistically, if you want to maximize your distance, the best way to go about it is to remain balanced and focus on making that solid contact on the center of the clubface.

The center of your gravity should be placed near the middle of your stance during your backswing. On the downswing, it should move toward the target. Allowing your weight to drift onto your back foot during the backswing is a common rookie mistake and one you’ll definitely want to avoid. Once your weight begins to move side to side when you’re swinging you’ll end up losing power and accuracy from the driver. Focus on keeping your weight centered during the backswing and you won’t have any problems.

Life at the Top 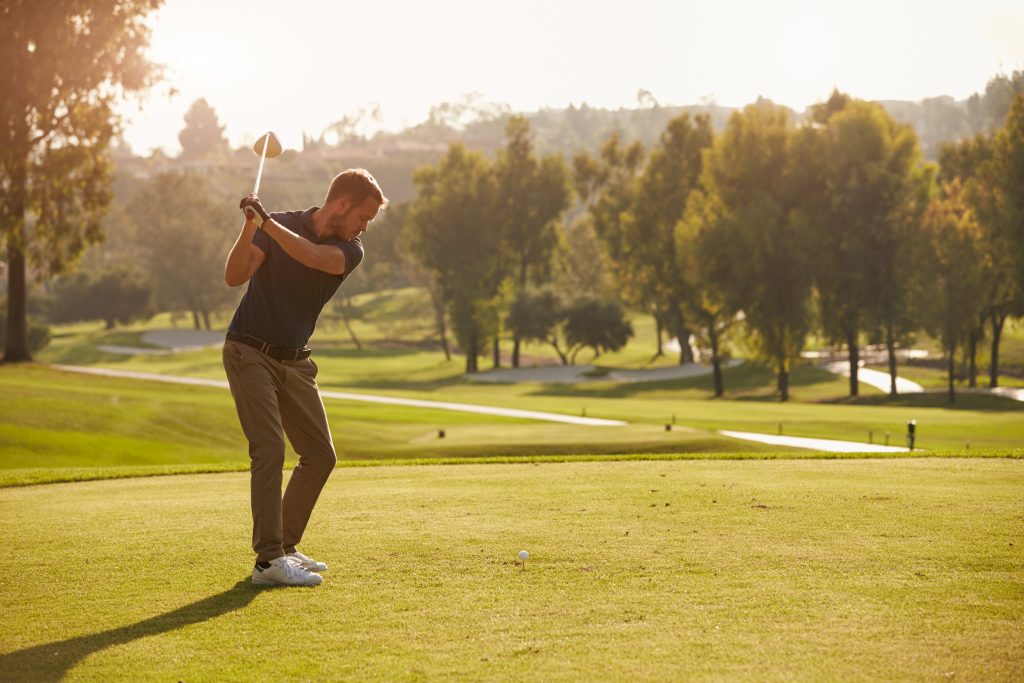 When you’re taking a swing with your driver it’s easy to rush, but this will usually prevent you from taking enough time at the top of the backswing in order to allow the club and your body to get in the correct position. Basically, you should pause slightly at the top. While you shouldn’t take a complete pause, more of a hesitation in your movement, doing so will allow both the club and your body to change directions, falling into the slot for the downswing.

A premature transition is a huge mistake because you’re preventing the club from getting all the way to the top. When the backswing is cut short, the golfer loses a lot of their power and risks creating a slice since the club will be outside the right swing plane.

In order to cleanly strike the ball, irons should be hit using a downward angle. The golfer will also be able to use the right amount of backspin in order to cause the ball to soar through the air. This is because of the design of the irons and how the player typically hits them off the turf, not the tee. With the advantage of a tee under the ball and the design of a driver, using a sweeping motion is an ideal way to attack the shot upon impact.

If you want to hit a good shot with your driver, then too much backspin is going to be your main enemy here. While you definitely need some backspin in order to keep the ball on line and in the air, if there’s too much backspin it can generate a weaker shot that will fly high in the air only to fall short of its potential distance. When you hit your driver using a sweeping motion instead of using a downward angle it can help to minimize spin while giving you a more penetrating, better, ball flight.

Pull Back on Power

Every golfer wants to achieve as much distance as possible when they’re using their driver. However, it can be easy to overdo it, doing more harm than good. While there’s nothing wrong with taking a hard swing, it should never be at the expense of your balance when you’re swinging. Try taking a swing with your driver using less than one hundred percent effort, which will make it easier for you to balance and make contact with the clubface.

Most players think they’re losing a lot of distance by not swinging with one hundred percent effort, however, they will soon realize they average more distance when they pull back a little on their swing power. The goal here is to be more consistent and focus more on balance than speed. When a player can hit the sweet spot every time their distance will begin to increase as will their control over the flight of the ball.

Practice on Your Down Time 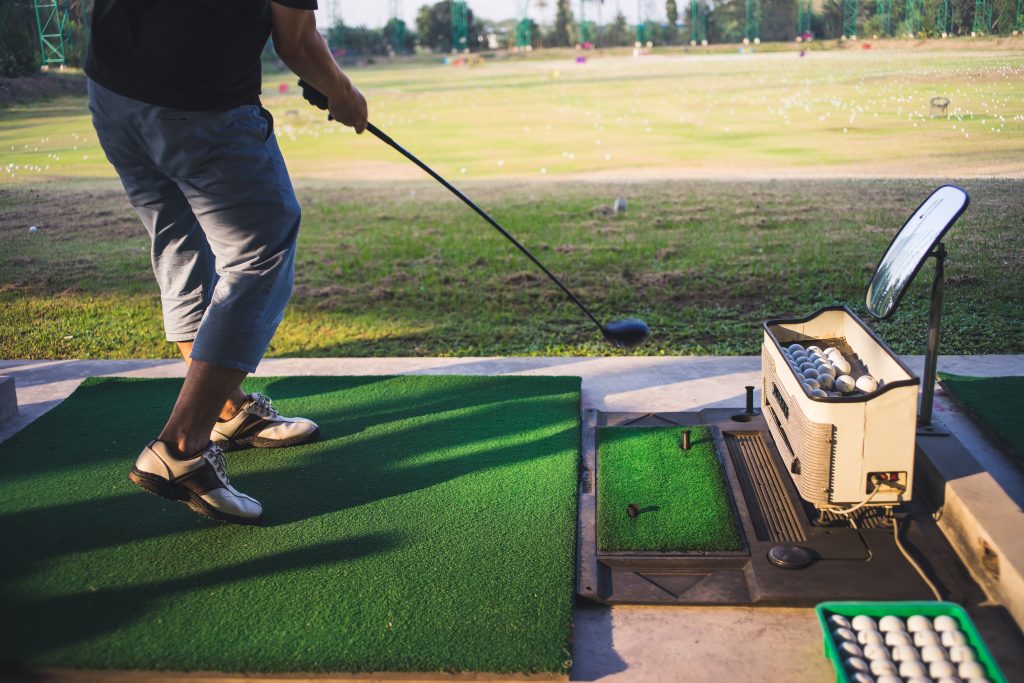 Every skilled golfer made it to the top by practicing their swing, their drive speed and accuracy, and their setup and stance. You can’t get by in golf with just a decent swing and like with any sport, skill takes dedication. If you’re not sure what type of driver to use, practice with a few different options and go with the club that feels right to you throughout the duration of your swing.

Focusing on shot preparation will allow a player to get the most from their swing. Many beginners will make the mistake of not choosing a target for their driver, and instead, end up just swinging with no real purpose. When a player hits an approach shot to the green, they will typically aim directly at the pin which is an easy target to pick. But off the tee, they can fall into the trap of shooting far down the fairway. Instead, they should choose a very specific target in the distance that they can aim their driver at. Trees tend to work well for this purpose. Before swinging pause for a minute and pick a target in the distance and focus on it and watch as your ball perfectly sails down the fairway.

Many newbies don’t realize how much distance can be lost or gained by the combination of the driver head and shaft they choose. Many players will simply purchase a driver off the rack, but this can be a big mistake. Instead, getting custom fit for a good driver is the way to go. Beginners often believe that getting a driver with lower loft can help add some distance, but for many players, this may end up decreasing their distance. Each driver will have its own unique characteristics, the most important being where the center of gravity is. When you add profile, flex, and shaft weight you’ll have endless combinations to choose from.

A stock shaft measures in at forty-six inches, but most pro players will play with drivers that have much shorter shafts. While a longer shaft allows the player to swing faster, it can also make it more difficult to find the center of the clubface. With a longer shaft, you’ll be able to take faster swings, however, this can also decrease your speed since you’re striking it all over the face of the club. A shorter driver shaft is often the best solution. Many players have found that if they use a driver with a short shaft they actually end up increasing their distance consistently since they end up striking it closer to the club’s sweet spot. For the right type of driver for you, make sure you work with a club-fitter.

Can a Golf Range Finder Improve My Distance?

Yes, the best golf range finder, like the Precision Pro Golf NX7 Pro Slope can accurately tell you how far away the next hole is, so you can adjust your swing and determine just how much swing power and backspin you’ll need to use to cover that type of distance.

Why Do I Slice My Driver?

Slices are often caused by an improper setup, a poor grip on the club, and an out to in downswing path. It can also be caused by an open clubface. The out to in swing path can occur when the player tries to reach too far on the downside, which will bring the clubface outside of the ball.

What Causes a Shank in Golf?

Many players believe that an open clubface is what causes a shank in golf because the ball tends to dart to the right, however, a shank is often caused by the player using an excessively closed face. The golfer will swing outside to in causing the face to close hard. The result is pushing the hosel closer to the ball. A shank occurs if the hosel catches the ball.

Many driving fundamentals will focus on proper body mechanics, how to focus on each aspect of the swing, and the importance of not going overboard in terms of using too much backspin and one hundred percent of your swing power. Focusing on a specific target in the distance, paying attention to your balance and center of gravity, and using a custom driver can all have a major impact on how much distance you achieve and your shot accuracy.