In the world of golf, golf course etiquette tends to involve more than just following a set of manners. More often than not, it’s a matter of safety. Additionally, etiquette also has to do with your pace of play, which can have an impact on the other players who are waiting to play through a particular hole. If you’re new to golf and unsure of the basic dos and don’ts, then this guide will walk you through many of the common mistakes that most new players run into on the course, what to do and what not to do, and how to avoid some serious embarrassment when you’re playing with or around experienced golfers.

What is Golf Etiquette?

It’s an essential part of the game and something that most beginners will learn about as they go, from golfers with more experience. These rules of etiquette will make the game more enjoyable for you and other players and will ensure you don’t negatively impact the players around you.

While you may be eager to play through a hole and take your shot, it’s important to ensure that the other members in your party and players who are patiently waiting for their turn are at a safe distance before you take a swing.

When you’re practicing your swing, always avoid swinging in the direction of another player. This is because you may accidentally kick up dirt, rocks, and debris, spraying the other player.

Never hit the ball until you’re sure that any players on the course are safely out of range.

If you do hit the ball and it’s directly headed towards another golfer, make sure you warn them by yelling out “fore”. This alert is internationally recognized, so once a player hears it, they will be sure to survey their surroundings and take cover if needed.

When using a golf cart, always drive carefully. Read the golf cart laws and safety guidelines that are posted in the golf cart. Proper etiquette will require drivers to stay off the grass whenever possible.

If you become angry about a shot, avoid throwing your clubs. Doing so is not only rude, but it could be dangerous as well.

Be prepared to hit your shot when your turn is up, in order to keep the round moving. No one likes waiting on another group to play through, so don’t make another group wait on you.

During a friendly match, the rule of the player who is away hits first is usually ignored and ready play is followed instead. This means players hit when they’re ready. Each player in your group should agree to ready play prior to putting it into effect.

Avoid spending too much time looking for a ball that’s lost, especially if there are people waiting behind you and ready to play. If you are determined to use the five minutes that’s allowed in the rule book to look for your lost ball, then wave up the group that’s behind you to let them play through.

Strive to keep pace with the group that’s ahead of you. If a space opens up ahead of you, allow a faster group to play through.

When you walk from your golf cart to your ball, make sure you bring a couple of clubs with you. If you only take one club, then you may have to return to your cart to grab a different one, which will waste plenty of time. 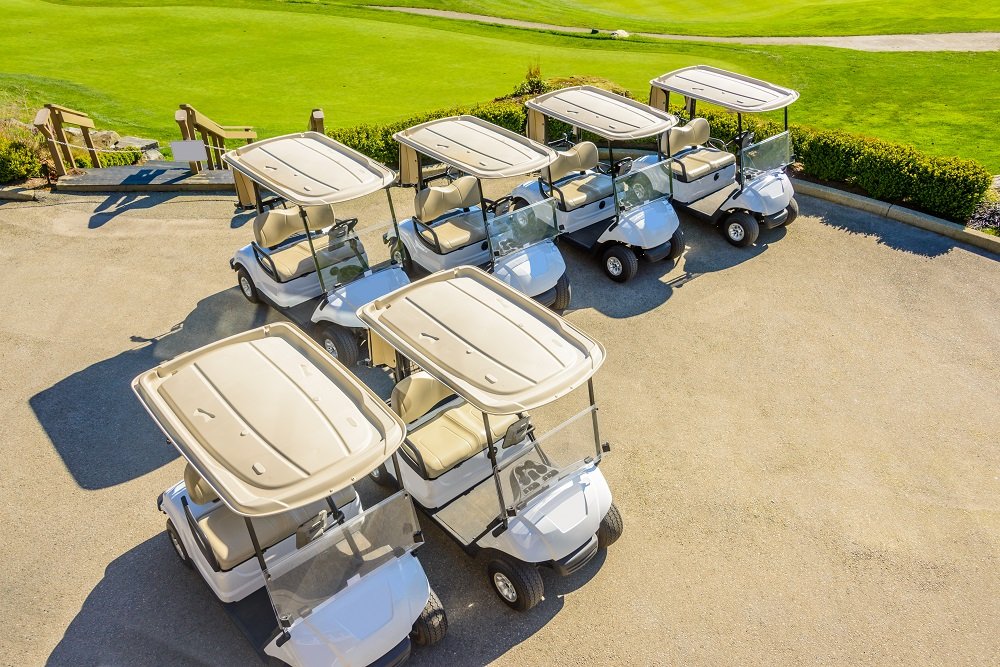 Pay attention to golf cart rules. On some courses, you’ll see signs posted that say cart path only. There may be other signs that ask you to follow the ninety-degree rule. Keep your cart away from hazards and greens. A cart’s wheels can do some serious damage to sensitive areas.

Be sure to rake a sand bunker, after you’ve made your shot, in order to remove damage to the area, including footprints, or the spot where your ball was.

Try to avoid taking a divot during a practice swing

Bringing the right golf clubs to the course involves both etiquette and rules. The rules will limit you to bringing fourteen clubs. There’s no minimum number of clubs that you have to bring, but try to avoid borrowing clubs from your partner. The rules allow you to borrow clubs during a round, in some circumstances, however, in most cases, it’s against the rules.

Even if you don’t stick to the rules your first time on the course, you don’t want to bother other players to borrow their equipment. Use your own bag, your own clubs, and other golf gear. Be sure that you bring your own golf tees and plenty of balls. Since it’s your first time on the course, you can expect to lose plenty of balls. Also, make sure you bring along a ball mark repair tool. These small tools can be purchased at any local golf pro shop for a few dollars. This tool is needed in order to repair ball marks on the green and it’s an important part of etiquette on the course.

For most rounds that you’ll play, you need to reserve a tee time. You can get a time by calling the course the day prior and specify the time you want to play a round. Once you have reserved a tee time, make sure you get there on time. Plan to get to the course at least half an hour early, which will give you plenty of time to warm up. If you miss the tee time, then your group will most likely lose their spot, especially if it’s on a weekend. Tee times are not always required, but it’s always good to have one.

Get to the course early enough to warm up, before your round is scheduled. As you warm-up, work your way through your entire bag, starting with the short irons, then go to the mid and long irons. Finally, play with the woods.

Finish warming up by using the best golf wedges before you head for the practice green for putting. Don’t arrive at the start of a round, only to slow down your group as they wait for you to finish taking your practice shots. 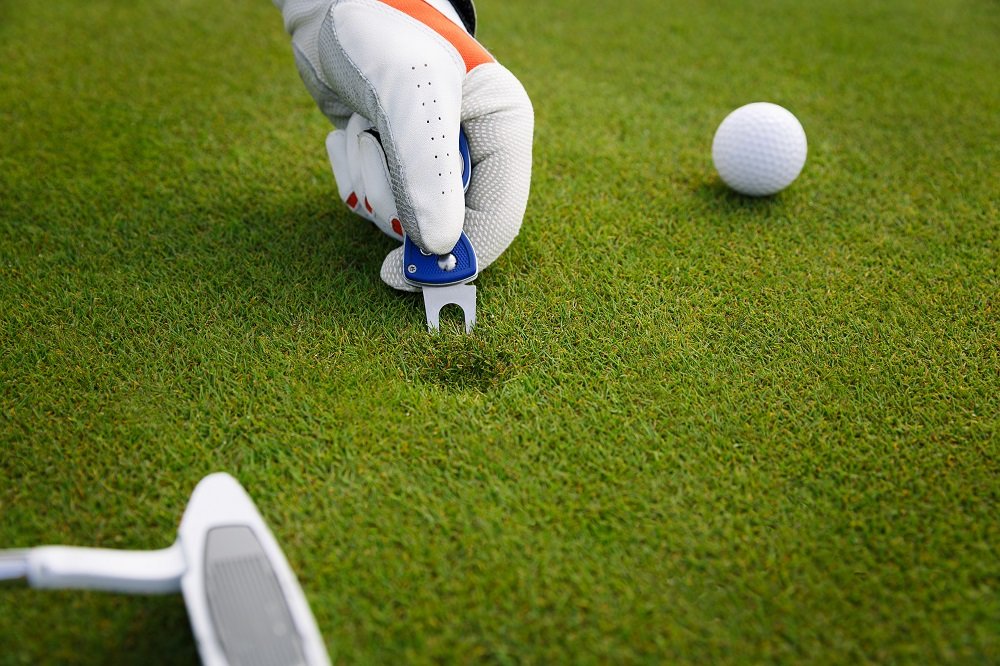 It’s important to repair any indentations or pitch marks that are caused by your ball hitting the green. You can use a repair tool, key, knife, or a tee to repair the mark. To do, work the edges toward the center. Avoiding lifting the center of the mark. Do not tear the grass. You can finish the repair process by smoothing out the area using your foot or a club. The goal is to get the area smooth enough to putt over. Standard golf rules consider it acceptable to repair pitch marks on your putting, however, you will not be allowed to repair spike marks on the putting line until you’ve finished putting.

If your ball is on a player’s line, then mark your ball. If the ball you’re using is not the furthest from the cub, mark the ball using a dark coin or a marker. After the ball has been marked, place the putter at a ninety-degree angle, with the heel touching the marker. Next, the marker should be moved from the heel to the toe of the putter. To return the ball to its original position, reverse the procedure.

If you’re asked to tending the flagstick and you don’t have a caddie, then be sure you’re not standing on another player’s line. The flagstick should be held at arm’s length, to prevent the flag from moving in the breeze, and to ensure that your shadow won’t fall across the line or hole. You can loosen the bottom of the flagstick in order to prevent it from sticking when you attempt to remove it by pulling it straight up once another player has putted. Remove the flag once the other player has hit the ball.

If you need to lay the flagstick down, make sure you place it off the green. This is done to prevent any damage to the green. The player who is the standing the closest to the hole will be in charging of holding the flag. After every player has putted, head to the next tee immediately.

All golfers love giving advice. Some players may welcome this advice, while others may find it annoying. The rule of thumb here is to avoid giving advance unless you’re asked. This tip is extra important when you’re playing with strangers and it can be crucial if you’re playing a round with clients. Avoid mentioned how a new client or your boss can improve their golf game.

Stay Off Your Phone

While it may not be possible to stay off your phone entirely, when you’re playing a round, constantly checking your phone or staying glued to the screen can drive other players in your group crazy. If you bring your phone on the course, at least place it on silent mode in order to prevent your phone from ringing and disturbing other players when they’re about to take a swing.

Avoid taking the game too seriously. This is a game that’s meant to be fun. If you play competitively, then go ahead and take it seriously. But if you’re on the course with your friend then have fun and relax. If you’re playing with strangers, then it will be even more important to keep a light and relaxed mood during a round.

Golf course etiquette can vary from course to course. Some courses aren’t as strict as others. If you’re playing a new course, or you’re new to golf in general, then it’s safer to follow these rules of etiquette until you get a feel for the course and how other golfers behave on the course. Many of these rules of etiquette are more about safety than politeness. Other rules are designed to help players to move quickly through the course, in order to avoid holding up other groups. This will be especially important on busy days. In the end, following these etiquette tips will ensure you have a great, safe time out on the course while being mindful and respectful of other players and their time.