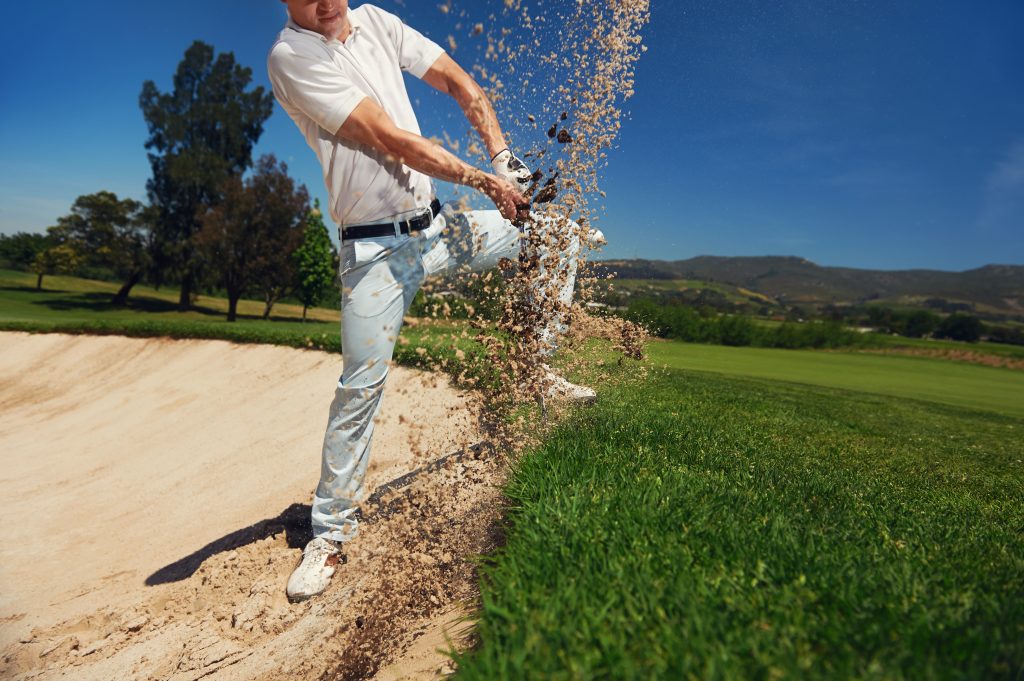 You may find yourself enjoying a leisurely day out on the course, but if you don’t know how to get out of a bunker, your relaxing day out on the green can quickly turn into an embarrassing disaster. If you find yourself trapped in a bunker it can be hard to maintain your cool. Fortunately, the tips I’ve included here can help you get out of a bunker in a matter of minutes, without drawing a crowd. You can have the best golf range finder, the best clubs, and a personal instructor, but if you don’t put in the time to practice specifically getting out of bunkers, then you’re going to be lost out on the course.

If you don’t know how to get out of a bunker, you’re not alone. While it can be difficult to master certain techniques, as with anything in golf, the more you practice, the easier it’ll be. Make sure you’re using the right club, the correct swing path, and stance, and ensure that your set up is consistent and you can easily pop a ball out of a bunker on your first try.

The Club Makes All the Difference

Like any type of job or task, you need to use the right tool for the job. If you find yourself stuck in a greenside bunker, then you’re not going to have much green to work with. In that type of situation, you’d switch to a high lofted wedge. Most golfers tend to go for the lob wedge in order to easily lift the ball out. This type of club can help to reduce rolling while keeping the ball nice and close to the hole. However, if you have some distance to get to the green or you’re trapped in a fairway bunker, then you should choose a lower lofted wedge. If you’re close to the green, then a fifty-two to fifty-six-degree sand wedge should work well. However, if you’re slightly further out, try grabbing a nine iron or a pitching wedge.

Choking Down on a Club

Most golfers mistakenly believe that choking down on their club can help to reduce the amount of distance they have to shoot for, but this isn’t exactly true. In reality, you’d be surprised regarding how much distance still remains that’s comparable to the distance you’ll get using a full grip. However, by correctly choking down around half an inch on the club you can get an accurate shot that will get you out of a bunker. 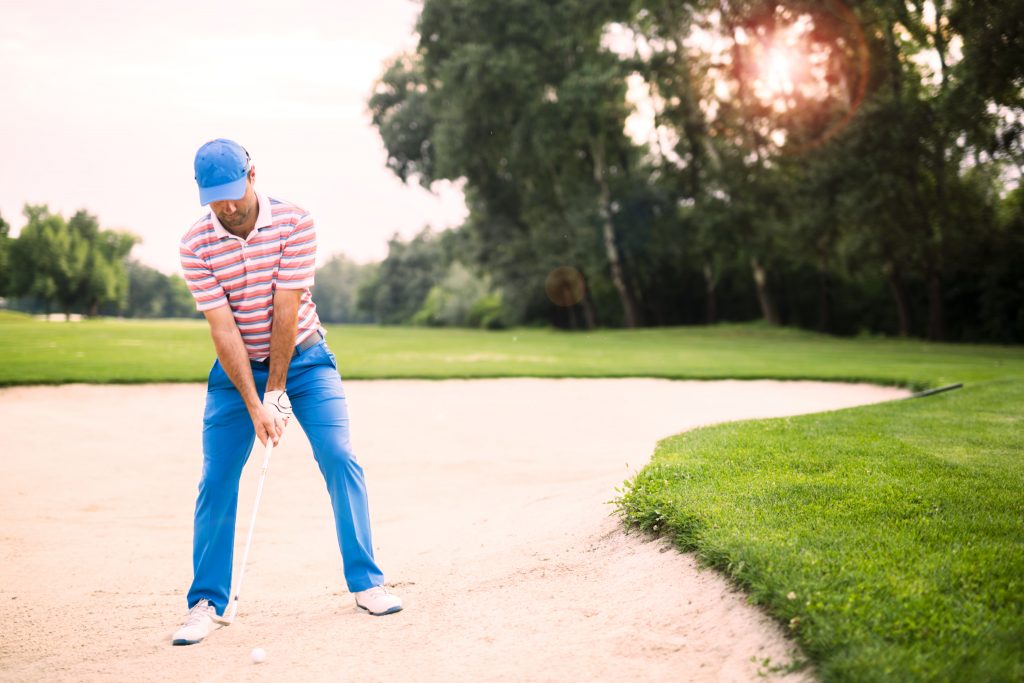 If your goal is to hit a decent shot from the bunker, then you’ll need to adjust your set up accordingly. To begin with, the ball should be positioned back of center in your stance. You need to have a good base for your shot, so try twisting your feet in the sand. Doing so can also help you to determine the depth of the sand around the ball.

Even if you know all the best golf swing tips and have an excellent score, all it takes it getting trapped in a bunker to throw your game off. Which is why adjusting your swing here will be so important. If you’re positioned correctly, you have the right club, and your ball is where it should be then now is the time to let it all go. In order to take a shot that’s going to pop that ball out of the bunker, you should only take a ¾ swing. This type of swing helps the ball to fly out high and soft with more control.

If you keep your lower body still it can improve stability while placing more of an emphasis on the hinge in the wrists. And the result? Better than average shot accuracy.

At this part in the shot, only move your eyes. In order to get out of a trap, you’ll need to use a steep swing with a high follow-through.

How to Get Out of a Greenside Bunker 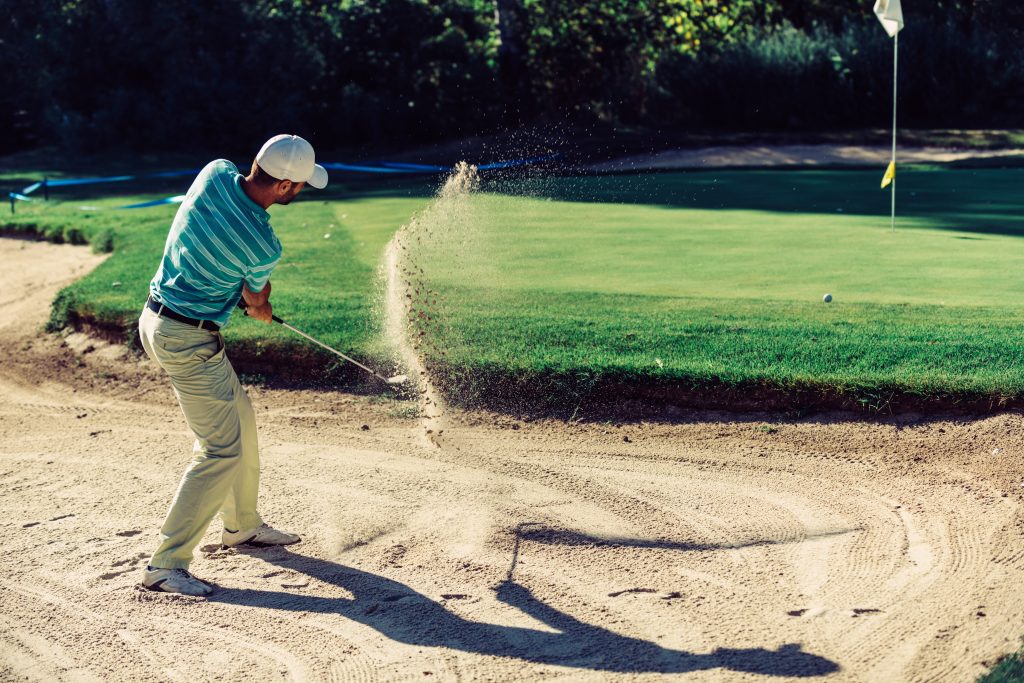 The greenside bunker shot is probably the bane of most newbie golfers. This shot really needs a more delicate touch in order to keep the ball on the grass. The golfer must also have enough confidence to boldly strike the ball and sand so that the ball is able to easily escape the bunker with just a single shot.

Many golfers would be happy to get their ball out of a greenside bunker any way they can. One of the trickiest shots that you’ll face in this situation is when there’s a major hazard on the other side of the green. Most amateur players tend to avoid practicing this type of shot, which is probably why it’s one of the most feared. While a new golfer may spend a lot of time pounding balls at the driving range, they fail to devote any time to practicing on the green.

To conquer this type of shot, most pros will have the ball placed near their leading foot, however, you don’t really have to go to that type of extreme. A simpler way to go about it is to put the ball two inches ahead of your center stance. Doing so will allow more of the trailing edge of the club’s head to be exposed. Now, you can slice through the sand more easily. This will allow you to maintain the type of loft you need throughout your swing, while also ensuring that you can easily get the ball over the bunker’s lip.

If you place the ball in the center of your stance then you’ll struggle with digging into the sand. This is exactly what contributes to failing to get the ball out of a bunker. Instead, you need to dig your feet into the sand and put more of your weight on your front foot.

When playing in a greenside bunker, most players will choose a sand wedge. However, if you’re dealing with a bunker that has a higher than average lip then you’ll need to go for a club that has more loft. If you’re new to the game then you may not use the loft of your club well. Before you set up your next shot, make sure you use your top hand to grip the club and twist ¾ of a turn to the right. Next, use your full grip with the club in this type of position. This stance will help to prevent the player from accidentally twisting the club shut upon impact.

Practice this type of shot often. When you practice often, you’ll come to realize exactly how simple it is to get out of a greenside bunker. You’ll also feel pretty satisfied when you get out of a bunker faster than even seasoned players.

How To Get Out of Fairway Bunker 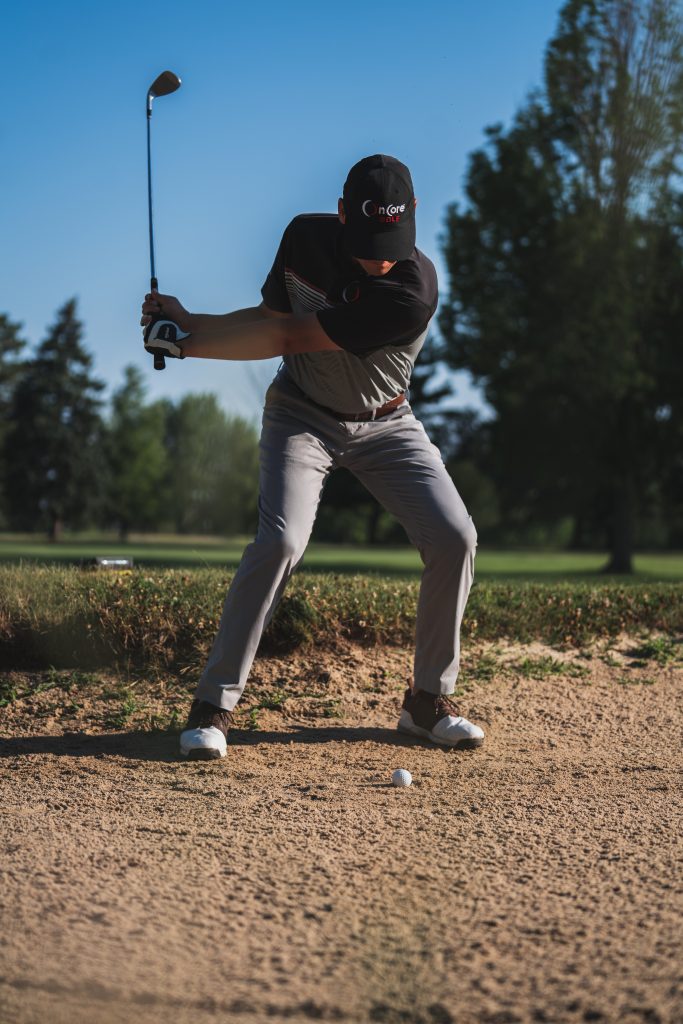 There’s plenty of golfers who believe that hitting a ball into a fairway bunker means their game is shot from there on out. But it doesn’t have to be. Regardless of whether your ball is resting in the middle, on a downhill slope, or it’s against the lip, if you make a few adjustments then you’ll have an excellent chance of saving a shot or two and getting out of the bunker faster than ever.

If the ball is against the lip, shallow your downswing. Doing so will allow you to get the ball clear of the lip. In order to do so, you’ll need to swing into the ball from inside the target line as you tilt your shoulder more than usual. The left shoulder should be higher than the right. In terms of the right club to use for this shot, use as much loft as needed in order to clear the lip. You may have to sacrifice distance, but at least you’ll be out of the bunker.

If the ball is mid-trap, trying taking a normal iron swing using a couple of adjustments. Grip down on the club so the swing bottom won’t be too deep in the sand and stand a little taller than you normally would. Next, when you’re at address, make sure you focus on the spot in front of the ball on the target line. Once you take a swing, try to limit any type of lateral movement away from your target in the backswing. Next, you’ll want to attempt to enter the sand with the club at the spot you’re focused on. Doing so will ensure that you make a solid connection. If you’re still having trouble getting out of the bunker, try to make sure that your chest remains centered over the ball.

If the ball is on a slope, a shallow downswing won’t do much. Instead, try setting up using a wider stance and place more pressure on the left leg. In terms of how to grip the club here, you’ll want to grip down on it an inch or two. When you take a swing, the goal is to hinge the club up quickly during the backswing, and then keep the lower body stable when you swing down on the ball. Control is the name of the game here. The ball will come out hot and low, so you’ll need to be prepared.

Can Using a Golf Range Finder Help You to Get Out of a Sand Trap?

Models like the TecTecTec ULT-X golf range finder are highly accurate and can tell you the distance between you and the next flag from the bunker, however, you’ll still need to use the correct club, swing, stance, and setup to get out of a bunker quickly.

How Often Should I Practice?

Practice as much as possible. But don’t just practice at the range. Actually get out on the green and into the bunker. If you master hitting your ball out of a bunker, you’re going to have a big edge over most players on the course.

Learning how to get out of a bunker isn’t exactly easy, but it is possible, with plenty of practice. Sand traps have always been a staple in the game and they’re found on every course ever built, regardless of where you play. Many players dread bunkers because they have no idea how to get out of them. They use the wrong stance or club, their setups are usually inconsistent, their ball position may be off, and their swing paths are often incorrect. But as you may already know, with every aspect of the game, you need confidence and consistency. In order to be confident in your ability to get out of a bunker alive, practice the techniques I’ve covered here.