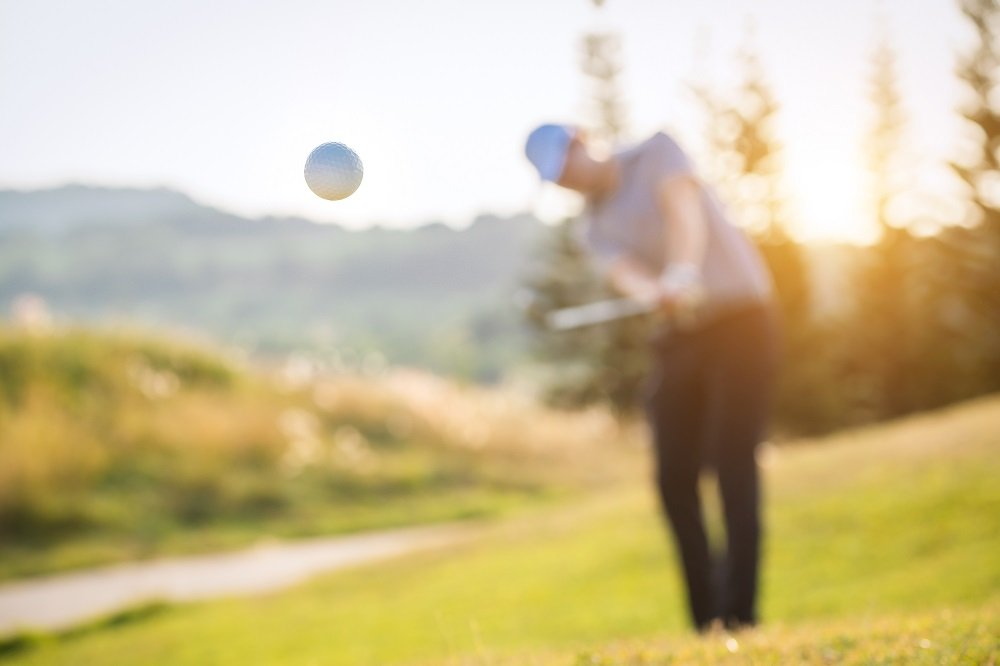 Learning how to hit 30 to 80-yard pitch shots is the goal of any golfer. This type of hitting power and accuracy isn’t learned overnight. It takes practice and dedication. If you’re struggling with pitch shots and hitting off fifty-yard, seventy yard, and eighty-yard shots, then you’ve come to the right place. Read on to learn how to perfect your hitting accuracy at a short distance. Like any tough shots in golf, hitting pitch shots and actually getting the ball where you want it to go, is going to take plenty of practice. This guide will go over how to make pitch shots at a variety of yardages, which clubs you should use, how you can adjust your swing, and what methods you should try to master these complicated and often, frustrating shots.

What is a Pitch Shot in Golf?

The low-handicapper is more than familiar with the dreaded pitch shot, which has a reputation for being a difficult shot to make since you have to essentially shorten your backswing based on distance and ball height. But if you’re new to golf, then you may not even know what a pitch shot is, how it differs from a chip shot, and why exactly this type of shot is so difficult to make.

Pitch shots are shots that are played using a highly lofted club that’s designed to go a short distance with a steep descent and ascent. These shots are played into the green, usually from thirty to fifty yards or closer.

You can easily picture a pitch shot when compared to a chip shot. Chip shots are often played closer to the green, with the ball in the air for only a short period of time. The point of the shot is to get the ball onto the green, allowing it to roll to the cup. The majority of a chip shot involves rolling. Pitch shots are in the air for the majority of the distance, meaning there’s less roll once it lands. A pitch shot will also go much higher in the air compared to a chip shot.

The pitch shot is usually played with the best golf wedges. In a set of irons, you’ll find a club called the pitching wedge, which was initially designed for the pitch shot, however, you can use other wedges, such as the lob, sand, or gap wedge to hit a pitch shot.

Typically, if you have the option of hitting a pitch or chip shot, most golfers will opt for a chip shot. But it’s not always an option. When you need to get the ball in the air quickly, when there’s problem areas or rough areas, then a chip shot will not be a good option. This is also true if you need the ball to come down at a steep angle, hitting the green without rolling too much. In both cases, the pitch shot is the best choice.

In order to hit a solid pitch shot, the setup will be vital to get the ball to travel the correct distance. Your body alignment and clubface must be open, while the ball should be placed in the middle of your stance. Ensure that your weight is placed on your left and that your legs remain quiet during your swing. A player’s legs should only move with the swing’s momentum. The ability to control the distance of this type of shot can vary by the length of the swing.

How to Hit 30 Yard Shots 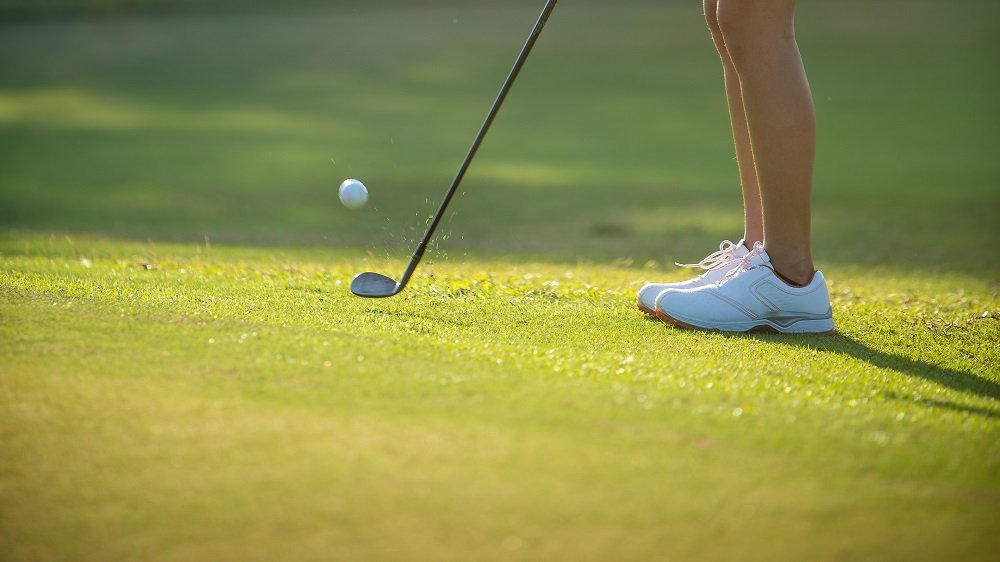 A thirty-yard pitch shot can be difficult to make. The golfer will have many choices as far as trajectory goes, which can be confusing for some. Since you will be hitting the ball into the air more than you’d need to for a chip shot, you’re not going to need to use a full swing, which could result in mismatched swing mechanics. Some players will intuitively understand that they must use less force, but they tend to pull back the power of their swing the wrong way, freezing the body and using too big of an arm swing. This is mainly because they end up focusing on the flag as their target when they should focus on where they want their ball to land. This results in poor distance control. With a pitch shot, the goal is to use a consistent golf swing and predictable contact. This is how a golfer can develop a feel for distance. It will also begin with using a good setup.

Begin by taking a stance that’s slightly closed, as you square the face. This will make it much easier to begin on the right path. On the backswing, you’ll allow the right wrist to hinge slightly so that the handle remains close. Be sure that you turn your body. On the downswing, you’ll turn toward your target, keeping your hips level as you finish. Your golf grip and hands must finish close to your belt, with the butt of the club by your left pocket. Clubhead speed is generated by releasing your hands and turning your body, instead of tugging the handle.

The goal here will be to try and get more loft. Most players tend to begin with an open clubface and stance, which can cause them to lift their hands away from the body during the backswing. This can cause the ball to go to the right.

Making this type of shot is pretty simple, so building a consistent stroke will not take long. Begin by visualizing the shot. Based on what’s ahead of you, you’ll need to determine if you need to hit the shot high or low. After you’ve chosen the right stroke, choose your club. Most players will go with a standard pitching wedge.  Once you take the club away from the ball, the wrists should be hinged, which will maximize the angles between the ball and club, while ensuring that you create a steep angle. This can also cause you to get some spin on your pitch shots. Accelerating through impact will be very important. If you don’t accelerate upon contact, then you’ll never be very consistent from fifty yards. If you decelerate into the shot, the results are going to be pretty messy. You can try shortening your backswing if you find yourself struggling with this. Be sure to keep your hands moving once you’ve made contact. If the hands stop as the club keeps moving, then you’ll bring its leading-edge into play. in order to ensure you keep moving throughout the duration of the shot, keep your torso moving. You’ll finish the shot with your chest facing the target.

The seventy-yard shot tends to give golfers plenty of grief. This shot is an in-between distance that’s neither a greenside nudge or a full swing. However, it’s also a shot that can set up a score for the hole. Because of this, it’s crucial that you learn how to hit one-off. Many pro players will try to get the ball rolling on the green as soon as possible, which is a great strategy. In order to do this, you’ll need to consider the club selection, spin control, swing path, and the lie. In terms of club selection, the difference in the length of swing isn’t much. The lob is close to a full swing. The pitching wedge is a little less. If you don’t want to focus on the length of the swing, then consider where you want the ball to go. If the greens are soft and there’s a good breeze, then pick the pitching wedge since you’ll have more of a chance getting the ball where you want it to go in windy conditions. More loft will involve more spin. When you need to get a shot through the wind, it’s always best to take spin off. The lob wedge offers a longer swing that can be more difficult to control.

The next step after choosing the club is reading the lie. Most short game shots are lie-dependent. You won’t be able to spin a ball from a heavy lie. The spin will be reduced the moment you have to go digging in. The issue here is control since the ball doesn’t have the spin it will run further. A ball that’s sitting up nicely will give you more options.

With a seventy yard shot, you will want to aim the face at the target, swinging down the line of your feet using an open stance. This will cause a slight cut spin, but you’ll have your left hip out of the way, which will help you to release the club. Slightly open the face in order to present the wedge bounce to the ground.

In order to increase spin, you’ll move your foot closer to the ball to encourage a steeper attack. This will put more action into the ball, causing it to stop faster. Be sure to keep loft on the face, allowing it to escape across you, in order to cut the legs from under the ball.

Did you know that the majority of a pro golfer’s practice time is usually spent hitting shots inside one hundred yards? Eight-yard shots can be tricky for many players. Fortunately, there’s a couple of different ways you can go about it. One option involves a lower trajectory, while the other involves a high flight.

Using a lob wedge is often the best option for this shot, since it offers plenty of spin at this distance, using a chest-high swing. For this shot, try to keep the rhythm the same as you do with other types of pitch shots. However, this shot may take a little more practice, yet it will be worth it in the end.

During a shot, try choking down on the club a few inches for more control. Keep in mind that the more you choke down on the shaft, the stiffer it will become. It will also significantly lower your shot, which is why you need to be careful how far you choke down on your club. Alter the length of your swing in order to control the distance. This is where you’re going to want to spend the most time practicing. Focus on mastering three different backswing lengths for this shot. But nailing down a few different lengths will take several hours of practice, since altering your swing can feel very alien. In the end, once you’ve gotten a handle on the three different backswing lengths, go with what feels the most comfortable to you. The eighty-yard shot is tricky, even for the pros. Only with practice, and learning how to control the distance by altering your backswing, can you hope to sink one.

Now that you know how to hit 30 to 80-yard pitch shots, you can get started practicing the techniques that I’ve included here, determine which type of wedge works the best for you, experiment with your stance and rhythm, and dedicate more time during practice to making these types of challenging shots. Once you get the hang of perfecting a pitch shot, you’ll feel more confident on the course, and you’re sure to blow your friends away as you land a shot from inside one hundred and thirty yards, effortlessly.