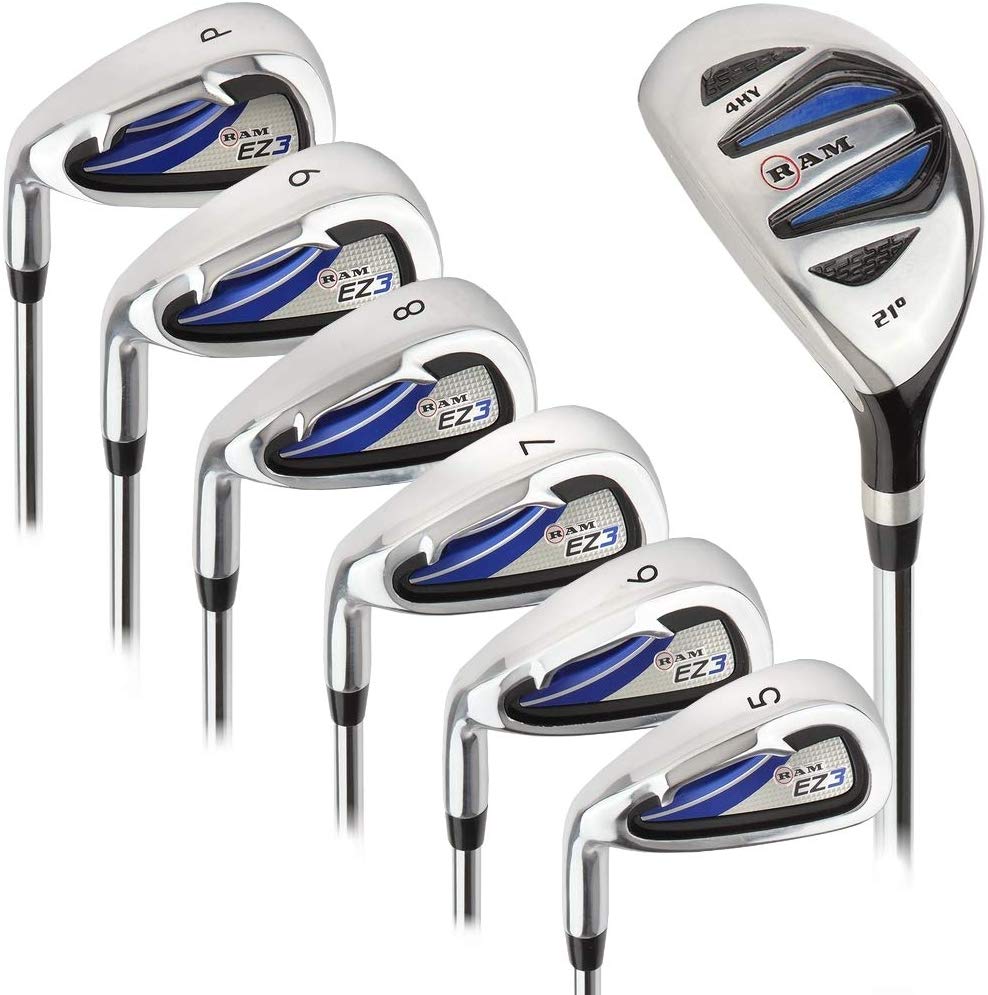 The EZ3 irons set by Ram Golf comes with a complete set of irons and includes a free bonus hybrid club for those more challenging shots. These are the best irons for a beginner and high handicappers. They’re easy to use and incredibly forgiving, compared to a standard set of irons, so you’ll definitely have an edge out on the green.

Our Verdict: This set of irons designed for beginners is a great buy if you’re not looking for anything flashy and simply want to improve your striking ability with these types of challenging clubs. While they lack some of the important golf tech features that higher-priced clubs offer, beginners who want to learn the old-fashioned way will appreciate the set’s playability and forgiveness. Overall, these irons and the included hybrid can help you improve your striking ability, control, and precision, however, if you’re in serious need of improvement you may want to invest in a more expensive single iron that’s designed with the beginner in mind.

These are the types of golf clubs that many players struggle to use. These irons come in a range of lengths and have flat faces with more loft compared to other types of clubs. Additionally, they’re incredibly durable and made out of solid metal. These are the clubs you’ll use for those shots that require more accuracy. Their flat face design, combined with their increased loft allows for shots that stop more quickly and travel farther. 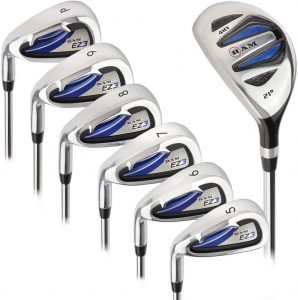 This full set of irons includes:

If you’re new to golf, then you may not understand how to choose the right iron in this set on a shot by shot basis. But these clubs should be used when you’re around two hundred yards away from the green. When a player is closer to the green they’ll use a higher iron such as a seven, eight, or nine-iron.

Each of the club’s cavity back is designed with improved forgiveness in mind. This means if the hit is off-center the strikes will go further and feel more solid upon impact. Irons are irons, which means these clubs can still be difficult to hit with if you’re new to the game, but their unique design definitely makes them more beginner-friendly than a traditional set.

The three and four irons tend to be harder to hit with compared to the seven-iron. In many cases, high handicappers and beginners will replace these clubs and use the included hybrid instead, since it’s more forgiving. Another option is to rely more on the seven or nine irons, which are both higher lofted clubs that are easier to hit with.

These days, many manufacturers are simply excluding both of these clubs from a set of irons. Typically, a player won’t even bother using them due to their reputation for being so difficult to hit with. In this case, the manufacturer has also decided to skip the three and four irons in favor of a hybrid club, which is an excellent alternative for newbies.

When it comes time to choose the appropriate iron in the set, based on the distance to the next flag, most beginners will be totally clueless. However, over time, as you become more familiar with the game, you’ll automatically know which club to use per shot. Keep in mind that this set doesn’t include the three and four-irons. This is because most players can agree that both clubs can be incredibly difficult to hit with. So, instead of including these two irons the manufacturer has included a hybrid club, which is often used in place of both the three and four-irons.

Below, you’ll find a list of each of the clubs and when to use them based on distance.

This should give you a better idea of which of these clubs to choose based on your distance from the green. Essentially, you’ll have to memorize this information in order to put it to use when you’re on the course. But over time, knowing which iron to use will feel like second nature.

Swinging with These Irons

Irons aren’t exactly known as the easiest clubs to use, and these clubs aren’t much different in terms of overall playability. However, they do have a reputation as being more forgiving than traditional iron sets.

But knowing how to swing with long irons can be tricky, even for more experienced players.

In your hands, you’ll note that there’s a slight give in the grip that makes the club easier to hold comfortably. The overall design feels slightly lighter than a traditional iron. The club heads have a nice weight to them, which helps to increase their overall playability and forgiveness, especially for those golfers that are prone to mishits.

Even a seasoned player will struggle from time to time to hit a solid shot using an iron. However, with plenty of patience and practice, you can master using these longer clubs.

The manufacturer has included a free bonus hybrid club, but as a beginner, you may not know what type of shots this club should be used for, or when to use it in place of one of the irons. This club features the best qualities of the long iron and the fairway woods, however, its overall design strives to avoid the negatives that are tired to both types of clubs. If you’re on the course and have a hard time hitting with the three or four iron, then this club can be the best option.

As I mentioned earlier, the three and four clubs are known as some of the toughest clubs to hit with, especially for beginners. But as a beginner, you now have the option of replacing both of those clubs with this hybrid. Some players may even choose the hybrid over the five and six-irons.

It can also be your go-to club that you’ll use to replace your fairway woods. Fairways have longer shafts, heavier heads, and a wider sole, which can make them difficult to control. This hybrid is lighter and shorter, offering better playability and giving the golfer more control over their shot.

Additionally, this hybrid has a much wider sweet spot, even compared to the seven-iron in this set. The hybrid’s shaft is much shorter than even the average fairway’s so you’ll enjoy ultimate control. Its design makes it more likely that you’ll hit the sweet spot and get your ball higher in the air.

Can this iron by TaylorMade stand up to a whole set of irons? Most players seem to think so, and considering the high price tag, you can bet it’s a club that will completely change how you play. While this set includes all the irons you’ll need on the course, in addition to a hybrid, the TaylorMade club is often used in place of most irons due to its impressive forgiveness and playability.

This club features a new speed bridge that allows for improved ball speed and distance.

The club’s speed bridge is designed to dampen vibration to improve the overall feel of the club while offering better feedback upon impact. It’s equipped with a 360 degree undercut and a fluted hosel, both of which significantly lowers the club’s center of gravity in order to increase ball speed and the launch angle. This results in a more penetrating, stronger ball flight, even with a weaker strike.

While this set of irons by Ram is known as a beginner-friendly, set, it lacks the type of golf tech that the beginner needs in order to build their confidence and boost ball speed and distance.

However, if you’re on a budget, then this full set of irons may be a better option than the ultra-pricey club by TaylorMade.

This set of irons by Ram is definitely beginner-friendly, but the clubs lack the type of technology that most beginners need to achieve greater distance and improved ball speed. Additionally, the set excludes both the three-iron and the four-iron, in favor of a hybrid. However, they’re a great starter set for those players that don’t want to rely on a single iron or hybrid and want to improve their overall striking ability. This set is also very budget-friendly, so they’re a great choice if you’re eager to get out on the green and test your striking skills. I gave this set a rating of four and a half stars out of five.