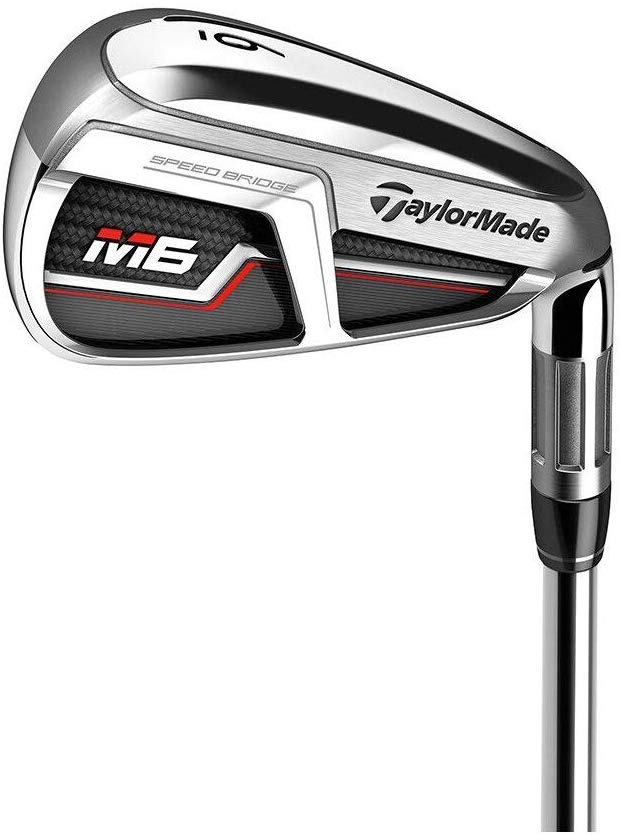 TaylorMade has designed some of the best irons for a beginner in the past. Their latest model, the M6 is considered a game-changer, due to the innovative design that can help improve a player’s club control, trajectory, power, and speed. The manufacturer has a long-standing reputation in the golfing community. Their latest iron is creating some serious waves, with claims that it can instantly shave some points off your game, but are these claims true?

Our Verdict: The M6 by TaylorMade features a loft that’s relatively stronger, which will give players a positive feel. The club’s larger address profile is also a big confidence booster, especially in intense situations. The club is built for low, mid, and high handicappers. This versatile club can also be used by both left and right-handed players, thanks to the ergonomic design. Basically, this is a very user-friendly club that doesn’t disappoint, and it’s one that every golfer, regardless of skill level, can benefit from using.

Considered one of the hottest irons around, it offers more forgiveness and delivers a superior performance. Most players will find the club very responsive, although it does sound a bit hollow. It feels light, looks big, and can be the confidence booster most players need to take on any type of challenging shot.

During the course of a game, a golfer will use a variety of clubs. Depending on course conditions, they may use twelve to thirteen different clubs from fairway woods to drivers, and a variety of irons with a variety of loft adjustments and different heights. There are many clubs to choose from. If you need to determine your next shot, including spin, ball speed, trajectory, and launch angle, then you need to use a club that’s perfect for that particular situation. This manufacturer produces some of the leading clubs in the industry, but their iron line is by far their most popular.

The manufacturer has changed up their line of irons for beginners and made the clubs sound much better to your ears. This model will cost the same as their other big selling iron, the M4, however, the addition of the speed bridge is one of the many features that will make this club stand out from the competition and make it worth every penny.

The iron may be a little longer than a traditional iron, however, it provides the type of forgiveness and distance that can totally change how you play the game.

This time around, TaylorMade has created a set of irons to be reckoned with. The cavity back irons range from four to seven irons, however, the M6 model is a thru-slot design, which the manufacturer has used in the past with another popular set of irons. The design creates a variable thickness face that’s solely connected to the body of the club via the top line, which allows it to hinge just like a metal wood face. The design will lower the point of deflection while reducing the weight located forward in the sole. Despite the fact that the slot is much smaller, its effect is bigger due to the free-floating face design.

This works to stiffen the structure and supports the face. It will also improve the sound by minimizing the vibrations that are generated upon impact. While the open cavity directly behind the speed bridge gives the club a more modern look, it’s also prone to trapping dirt, which is something you’ll want to keep an eye on.

This design is very simple and effective. It can also significantly improve your overall performance.

If you’ve been searching online for golf grip tips or driving fundamentals, stop what you’re doing and take a closer look at what this club can do for your game. This is one of the better-looking beginner irons I’ve seen. It features a touch of burnt orange along the back of the cavity and has a sharp clean look. It’s not a club that’s can easily be categorized as a game-improvement model.

The club’s loft is similar to a four-iron, however, this means that the loft is on the strong side. A four-iron’s loft begins around nineteen and a half degrees, with the wedge at forty-five degrees. While this is all relative, if you’re used to a club with a traditional loft, then switching to this model will make you come down a number or two.

This club is wide and big. It’s much bigger than the company’s M5 iron. Users will enjoy a much larger profile at address and a wider sole. It also comes equipped with a steel shaft. The undercut design relocates the weight of the club to the back of the head. A lighter metal is used in the hosel design and goes around the length of the shaft. 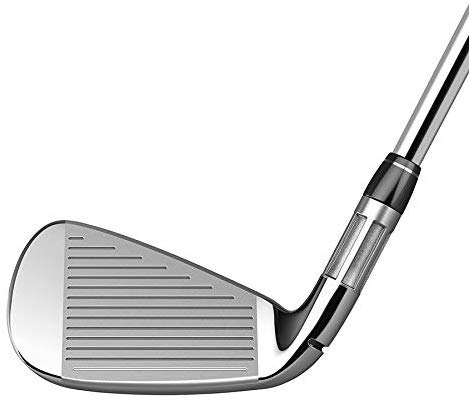 This club feels a little heavier to swing, compared to a traditional six-iron. The heavier weight combined with the lack of face slots can have an impact on ball speed. However, this club is more about hitting consistency.

This club does offer a more solid sound compared to competing models, which means you’ll enjoy a more refined iron. Additionally, the loft is one and a half degrees stronger. Combined with the bigger sweet spot, you can expect to gain a decent amount of yardage.

The manufacturer has incorporated a new speed pocket that’s much faster than other models previously made by this company. Since the clubhead features the thru-slot, you’ll notice that the face slot is absent. The addition of the speed bar and the lack of the face slot keeps the weight of the club low. Currently, many golfers consider the speed slot to be one of the widest and most flexible on the market. It works by expanding the flexible portion on the clubface, which works to improve ball speed and distance.

The club’s damping polymer masks any unnecessary vibration and sound. The compression damper will activate upon impact and works to reduce vibration and enhance sound. It can also help improve the feel of the club, which will boost your confidence on the course.

This model features a 360-degree fluted hosel. This feature is designed to improve the club’s playability for players of all skill levels. The result? It generates a higher trajectory and keeps the center of gravity low.

The club also features the company’s patented Inverted Cone Technology. The design features the thinner face, which is meant to improve ball speed. The ICT design also helps to provide the club with a much larger than average sweet spot.

This club features the ultra-thin face design that makes it one of the fastest clubs on the course. The club’s altered thickness in several areas of the face work to make the sweet spot more accurate and leads to the dispersion of some distance and speed. Because of this, many golfers consider this the fastest club on the market. The addition of the speed bar further stabilizes this iron. Throw the speed pocket into the mix and this is the club you need to carry your ball the distance. With the seven iron by Mazel, you’re also likely to experience improved speed and distance, which a much higher trajectory than what the club by TaylorMade offers.

But because of this model’s inverted cone feature, you can even expect misplaced shots to be straighter, although this fact is puzzling to many users. However, this is due to the off-centered positioning which gives the club directional bias. The speed pockets and bridge links together, moving the club face’s point of deflection to the lower area of the clubface, allowing for superior ball speed even if you’re prone to mishits toward the toe or heel region.

Basically, many players believe that this club allows you to generate much better shots compared to the competition. But the higher price tag is what makes most potential buyers sit back and consider whether this type of beginner-friendly club is worth it. The club by Mazel can also do wonders for your long game, but it simply can’t stand up to this club’s tech-heavy design. However, if you’re new to the game and on a tight budget, it may seem like a more logical buy. 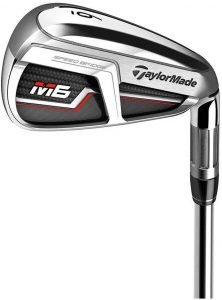 The TaylorMade M6 features a center of gravity that’s remarkably low due to its advanced design. The 360-degree undercut works to shift most of the club’s weight to the lower portion of the clubhead. It also offers a high moment of inertia, giving players a considerable margin for error.

This iron is not only very forgiving, but it works to transfer energy more efficiently upon impact, allowing players to experience a significantly higher launch with minimal effort. This is the club that will change how you play the game and one that will instantly shave serious points off your score. I gave this club a rating of five out of five stars.